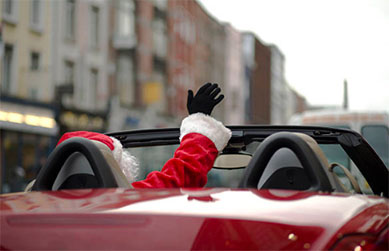 “Ho! Ho! Ho! Meeeeerrrryyyyy Christmas! Another year, another season of traveling the globe, filling hearts with joy and avoiding shotgun fire above the skies of Kentucky by people who think it’s hilarious to use ‘Ol St. Nick as target practice.

But honestly, dodging buckshot is the least of my troubles. With the rise of Amazon, the need for my services have gone down steadily over the past decade, forcing me to take side gigs just to make ends meet. And I’ve done it all. Walmart greeter, Men’s Warehouse sandwich board guy, and most humiliating of all – Mall Santa. I’d get kids on my lap who’d ask, “Are you the REAL Santa?”, and those moments when I’d smile and nod were the only bright spots in my day before I went home to a stuffy one-bedroom that hasn’t been cleaned in months.

But even that work dried up, so I ended up becoming an Uber driver. I thought, “This will be great! Who wouldn’t want to be shuttled around by Santa in his sleigh?” Little did I know about the horrors that were in store.

First, I thought I would have the market cornered in the North Pole. I’d get the notification for a pickup and be on my merry way, only to find my ride cancelled as some Elf driving for Lyft swoops in and grabs my passenger in a Corolla. So I left the Pole and went to other cities I thought would be more lucrative. Great idea, right? That’s what I thought, until I was cleaning puke out of the sleigh for a week after picking up a bachelorette party in Vegas.

Then I gotta deal with the passengers who talk my ear off about the crappy gifts I gave them when they were 8. I don’t know how many times I’ve had to say, “Look, pal. I know you wanted a Nintendo 360, but you stole all your brother’s allowance money that year. So you got socks. Quid pro quo, jackass.” Felt good to give ’em a piece of my mind,..till I check my phone to find little Johnny gave me a one-star rating and reported me for reckless driving.

And I haven’t even mentioned the arrogant passengers who give me turn-by-turn directions as if I’m some cabbie from Uzbekistan. I visited every home in the Western world over the past 500 years, yet this hotshot thinks I don’t know the 405 is a parking lot during rush hour. And sleigh maintenance…forget about it. I even got pulled over and ticketed for an expired emissions inspection. Hey officer, why don’t you try finding a body shop that can inspect Dancer, Prancer, Vixen and Blixen on Sundays?

But I shouldn’t complain. It’s still work. And it allows me to get away from Mrs. Claus when she’s having her usual meltdowns about me not fixing the walk. So, off I go. Just got another passenger request. Charlie Sheen needs a ride to a party in the hills, so if you’ve got any prayers left in the tank for ‘ol Santa, now’s the time.

← PREVIOUS POST
We need to heal. Let’s start with a laugh.
NEXT POST →
See the Toast, Be the Toast

By GEOFF WOLINER  “Wow. WE DID IT! We’re going to the WORLD SERIES!!Which is best of 5, right? And we play the team from the Western division? …

“Hey guys, Francesco Dellagama here.  My friends call me Frank, my mother-in-law calls me moron, and guys on my bowling team call me things I can’t repeat around …

Jon: Jane…right? Hi! I was somewhat excited to meet you tonight, because it was either this or do my taxes, so I figured, what the hell? Jane: Me …