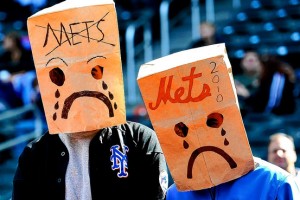 My friends call me Frank, my mother-in-law calls me moron, and guys on my bowling team call me things I can’t repeat around children.

But the one label I’ve been cursed with since the day I was born is Mets fan.

I guess my old man figured, “It’s not enough that I’m giving this kid a predisposition to diabetes – let’s saddle him with this too.”

And so it went. You see, I’ve been rooting for this franchise since I was old enough to boo.

The first game I remember was sometime during the ’87 season. Some random Dodger hit a routine fly to right, and Strawberry just stood there and admired it like someone contemplating the meaning of a Picasso.

I said, “Daddy, why didn’t that man catch the ball?”

And he said, “Because, Frankie, that man had too much nose candy last night.”

That sounded great to a 6-year-old, so I spent the rest of the night begging the old man to give me some nose candy.

Little did I know, that was just the beginning.

The Bonilla years came next. And here I thought the guys in my union made good money to sit on their asses for 25 years.

But when we finally got it together and made a World Series, we lost to the Yankees of all teams.

When old men in nursing homes talk about what they want to see before they finally take the big dirt nap, the Yankees fans ask to live long enough to see five more championships.

The Mets fans down the hall ask to live long enough see a July win over the Marlins.

But then our bullpen makes its grand entrance, and no amount of blood pressure meds can stop that express train to coronary town.

So they don’t even get that wish. Some guy who was playing for the Bogalusa Bogards last week and makes less than I do goes yard against our ‘all-star’ closer.

The only thing this guy knows how to close is a jar of mayo. And I’m not even sure he can do that without blowing it.

This bullpen is the reason that the Tums and Pepto reps in NYC are always President’s Club winners.

Every year, the strategy is, “Spend $150 million, then pray for the best.” Is this a baseball franchise or Memorial Sloan Kettering?

Every year, the strategy is, “Spend $150 million, then pray for the best.” Is this a baseball franchise or Memorial Sloan Kettering?

But I’ll give the Mets this – no one unites the Tri-state area quite like this collection of Keystone Cops.

Whether it’s Italians from Staten Island, Trinidadians from Ozone Park, Orthodox Jews from Kew Garden Hills, Koreans from Flushing,  Ecuadorians from Corona, hipsters from Williamsburg…well, no, screw them…we all come together to support this biblical monstrosity year after year.

Because we’re masochists. Suckers for punishment. It’s Stockholm Syndrome on a grand scale. We identify with our captors who sell us $40 pretzels en route to 4th place finishes, and say to the cameras, ‘The Wilpons are treating us well. If you meet their demands for a preposterous GM hire and more bobblehead promotions, they promise to release us from losing.’

But I’ll say this about us – being fans of this franchise builds character. When the Priest at my wedding asked me, “Do you take this woman in sickness and in health, for better or worse”?, I said, “Look pal – I dropped 800 bucks to watch Beltran stare at strike 3. All I know is worse. Trust me – she’s in good hands.”

Winning Wit, winner of Wedding Wire’s “Couple’s Choice” awards, is a team of award-winning comedians who help people write and deliver dynamic speeches and presentations through the application of stand-up comedy techniques.

Winning Wit has been featured on WTOP Radio and in several event publications as the leaders in event speech writing and coaching.

Do you have a big speech, presentation or other big life moment coming up? Contact us today, and we’ll see how we can make a star out of you yet.

Or at least make sure you don’t suck.

By GEOFF WOLINER  “Wow. WE DID IT! We’re going to the WORLD SERIES!!Which is best of 5, right? And we play the team from the Western division? …

“Hey guys, Francesco Dellagama here.  My friends call me Frank, my mother-in-law calls me moron, and guys on my bowling team call me things I can’t repeat around …

Jon: Jane…right? Hi! I was somewhat excited to meet you tonight, because it was either this or do my taxes, so I figured, what the hell? Jane: Me …